Despite strong growth, only one in four eligible micro-businesses benefit.

RIO DE JANEIRO, BRAZIL – The end of the year has brought some good news for Brazil’s smallest businesses as microcredits have grown by an impressive 26.7 percent year-on-year. In November 2013, the total value of microcredits reached a record high of R$4.873 billion, compared to R$3.570 billion in the same month of the previous year. 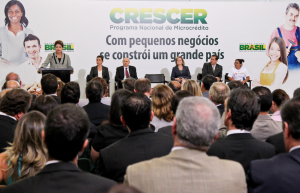 New loan approvals also stood at a record high with a volume of R$1.119 billion in November alone, according to figures from the Banco Central, Brazil’s central bank. Under the government’s program Programa Crescer (Growing Program), microcredit is made available to businesses with an annual turnover of up to R$120,000, with individual loans capped at R$15,000.

However, despite the strong growth, there is still a long way to go. Prof. Dr. Lauro González, co-coordinator of the Centro de Estudos em Microfinanças (Center of Studies in Microfinance) at the Fundação Getúlio Vargas, estimates that only a quarter of Brazil’s ten million eligible businesses benefit from the program.

“The recent push in microcredits is largely down to the [state-run] Banco do Nordeste”, says Professor González, “however, private sector involvement is limited.” According to González, the slow entrance of private sector lending institutions is due to them being crowded out by Programa Crescer, which subsidies low-interest micro loans. With privately-run banks priced out of the market, González argues that the overall supply of credit is constrained.

For Stélio Gama Lyra, however, the glass is half full. The Director of Sustainable Development and Microfinance at the Banco do Nordeste, by far the largest micro lender, sees the relatively recent involvement of Brazil’s two state-owned big guns, the Banco do Brasil and the Caixa Econômica e Federal, as a “big step forward”. 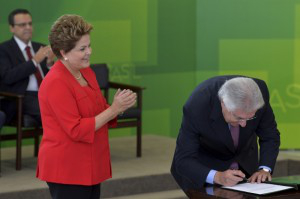 The Rouseff government has made micro-entrepreneurship a priority by appointing Guilherme Afif Domingos to the newly-created post of Minister for Micro- and Small Businesses in May, photo by Wilson Dias/ABr.

He predicts increasing momentum as the market matures. Since theCaixa started participating in the program in 2011, its microcredit loan book has doubled in size, from R$6.204 million to R$1.212 billion as at December 10, 2013.

At the same time, Banco do Brasil has more than quadrupled its loans, from R$146.9 million in 2011 to R$636.4 million in September 2013. The Banco do Nordeste itself, which has its customer base in Rio de Janeiro as well as in the North East of the country, lends a total of R$2 billion to 1.6 million entrepreneurs at an interest rate of five percent per year.

Jerônimo Ramos, Head of Microcredit at Santander, is also optimistic about the future of the sector. “There is consistent growth. Access to credit is empowering Brazilian entrepreneurship.” As at October this year, his bank has lent R$261 million to 121,000 micro-borrowers, eighty percent of whom are in the Northeast, with the remaining twenty percent in Rio de Janeiro and São Paulo.

Nevertheless, Ramos concedes that there is still much to be done. “Currently, the relevant market is not being served by banks in their day-to-day operations”, he says.

Microcredit lending as a financial service is considered to have been started with the Grameen Bank founded in Bangladesh in 1983, primarily targeting women in an effort to lift families out of poverty and fuel the economy. However critics have argued that microcredit also created a debt trap and in effect created a “privatization of welfare”.

Research in May 2011 highlighted that Brazil’s economic growth is largely being fueled by credit markets. The research by APAS (Paulista Association of Supermarkets) shows that 53 percent of all Brazilian families are spending more than they earn.