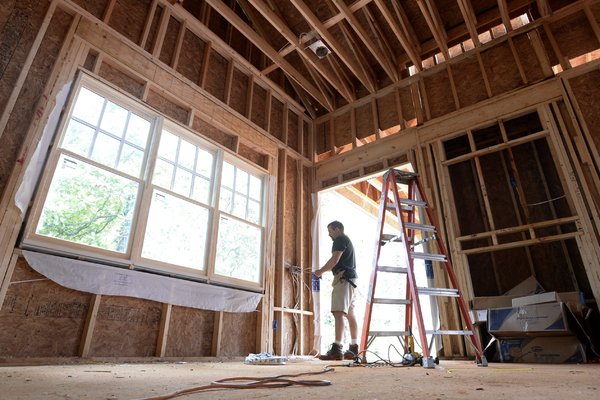 Five years after the global economy was falling at its fastest rate, Western economies are still failing to gain much-needed momentum, despite the efforts of central bankers on both sides of the Atlantic.

The challenges facing the United States and Europe were evident on Thursday, with the latest figures on growth from Washington showing signs of underlying weakness as the European Central Bank unexpectedly cut interest rates to a record low, reflecting the threat of deflation.

At first glance, the 2.8 percent annualized growth rate estimated for the United States for the third quarter might appear somewhat rosy. It was the fastest quarterly increase in output so far this year, and well above the 2 percent change economists had expected. But nearly a full point of that jump was caused by a buildup in inventory, which is likely to sap expansion in the current quarter. The annual rate of growth in consumer spending slowed sharply to 1.5 percent, the weakest quarterly increase in more than two years, while spending by the federal government fell 1.7 percent.

Last month’s government shutdown did not take place until after the period surveyed in the report, but the decline in federal spending in July, August and September showed how the across-the-board budget cuts imposed by Congress this year were beginning to bite. Over the last four quarters, federal spending cuts have shaved annual growth by half a percent, according to Dean Maki, chief United States economist at Barclays.

“Clearly, there was an upside surprise in the headline figure, but it doesn’t change our thinking about growth,” Mr. Maki said. “One common theme between the U.S. and Europe is that government spending has been a drag on growth.”

While the United States and Europe share many problems, it is clear that the situation on much of the Continent is much worse.

Many economies in Europe are only now stabilizing after six quarters of renewed recession, and unemployment across the 17 nations that share the euro currency stands at around 12 percent. In especially hard-hit countries like Greece and Spain, the unemployment rate is more than twice that.

The latest data on unemployment in the United States is due out on Friday, but in September the jobless rate stood at 7.2 percent. On Thursday, the Labor Department reported that new jobless claims in the week ending Nov. 2 dropped by 9,000 to 336,000.

The central bank’s move on Thursday was prompted by a sudden drop in euro zone inflation to an annual rate of 0.7 percent in October, well below the bank’s official target of about 2 percent. The decline raised the specter of deflation, a sustained fall in prices that can destroy the confidence of consumers and the profits of companies, along with the jobs they provide.

While austerity has taken root in both Washington and many European capitals, crimping fiscal policy, the courses charted by central bankers in terms of monetary policy have diverged. Thursday’s rate cut in Europe was a step in the right direction, Mr. Posen said, but he suggested that the central bankers in Frankfurt should follow the lead of the Federal Reserve and go much further.

Unlike the European bank, the Fed has moved aggressively to stimulate the American economy, not only cutting short-term interest rates to near zero but embarking on three rounds of asset purchases aimed at lowering borrowing rates and lifting the growth rate.

Most economists now credit the Fed with heading off the deep doldrums bedeviling Europe, while at least partly compensating for cuts in federal spending imposed by Congress and weakness in the private sector.

“The Fed opened up the floodgates and prevented even weaker growth or another recession,” said NarimanBehravesh, chief economist at IHS. “In Europe, you have fiscal tightening without anything like what we did in terms of monetary policy.”

Thursday’s report is the government’s first estimate for the change in gross domestic product in the third quarter, and the two subsequent estimates are likely to be revised considerably as more data becomes available.

Looking ahead, the picture for growth remains cloudy both in the United States and overseas.

Although the euro zone has technically emerged from recession, recent economic indicators have sent conflicting signals about the strength of the recovery. Few economists expect a strong rebound, but some are more pessimistic than others.

As for the United States, economists on Wall Street estimate that the shutdown will ultimately reduce fourth-quarter growth as much as half a percentage point. And momentum was slowing even before the shutdown, with businesses becoming increasingly cautious over the summer. Expenditures on equipment fell 3.7 percent in the third quarter, reversing a 3.3 percent gain in the second quarter.

“The economy remains stuck in the mud,” Ethan Harris of Bank of America Merrill Lynch said in a note to clients on Thursday. “Uncertainty over the future will cause business to delay making decisions.”