There's untapped potential for email marketers on Saturdays and Sundays, according to a new report. The findings also reveal a major lift in revenues with loyalty program emails.

Marketers are constantly recalibrating their email strategies to improve their effectiveness. And the final quarter of 2015 was no different. In fact, email volumeincreased overall by 23.4% compared to the same time period in 2014. It's a move that's apparently an effort to see more consumer actions on marketing messages—and it seems to have worked: Transaction rates and revenue per email increased by 14% and 12.8%, respectively, in Q4 compared to Q3 2015. That's according to Experian Marketing Services' quarterly email benchmark report.

Email marketers for business products and services had the highest volume increase (32%), followed by multichannel retailers (26.1%), travel (24.8%), consumer products and services (23.5%), and media and entertainment (16.5%). The only exception in the study was the publishing industry, which actually decreased its email volume (-7.9%). With more emails landing in readers' inboxes, open rates matched or were above those in Q4 in 2014, according to the report. 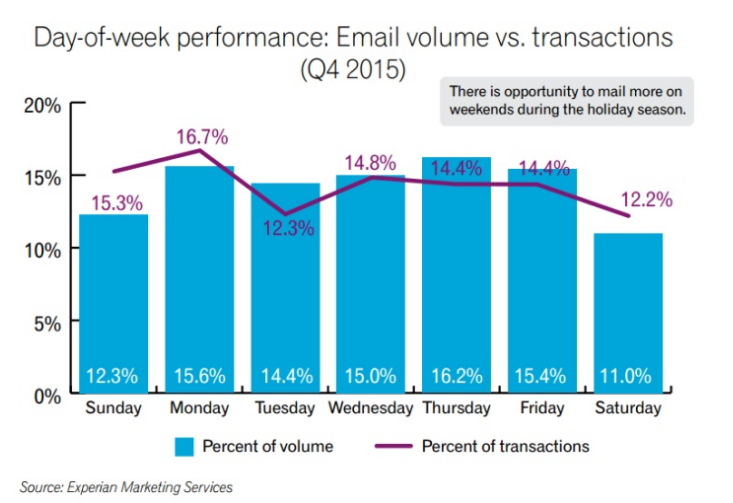 The findings also highlighted marketers' constant search to find the best time to email customers. But this report illustrated that one overarching best time to email simply doesn't exist. The report said that every brand has “a different set of customers with different needs and preferences,” so there's no one optimal time that fits all industries and customer bases.

However, the report does suggest that performance based on time of day can reveal opportunities to test whether mailing more frequently will positively impact performance. So, when transaction percentages are higher than volume percentages (i.e., when number of emails is low compared to the number of transactions), marketers might want to send more mailings. For example, weekends during the holiday season are a time that the study data suggests could be a boon for email marketers who increase the frequency of their mailings to include those days. Additionally, the findings show that early morning, late afternoon, and evening saw relatively high transaction rates in Q4 2015.

The findings also underscored the value of calls-to-action. “Shop now” or “book now” received between 5% and 10% of clicks. The study says that the words “new arrivals,” “hot products,” and “your next getaway” prompted more clicks. Not surprisingly, 56% of total email opens occurred on a mobile phone or tablet in Q4, compared to 54% in Q3 2015.

The report takes a close look at emails that promote loyalty programs—in particular, e-statements that have customer-specific information on point totals, reminds recipients of loyalty program benefits, and provide more opportunities to earn points and redeem rewards. These loyalty program emails enabled marketers to continue the conversations with customers after the holiday season ended.

Loyalty program e-statements, according to the report, performed well compared to standard promotional emails from the same brands that were analyzed in the study. These brands saw a lift in revenues per email (42%), unique clicks (36%), unique opens (31%), average order value (27%), and transaction rates (8%) from loyalty program emails over standard promotional emails.