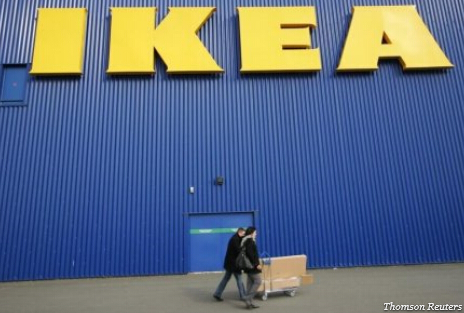 The store opened on Thursday in Gwangmyeong, less than an hour's drive or 14 minutes by train from central Seoul, with a sales space nearly as big as the Louvre museum at 59,000 square meters. The previous record-holder at IKEA, known for its inexpensive, self-assembly products, was in Stockholm spanning 55,200 square meters.

With the world's fastest-aging population, South Korea's attraction has faded for general retailers. Private spending growth fell from 4.4 percent on-year in 2010 to 1.9 percent in 2013.

But IKEA, now present in 43 countries with 365 stores, could fill a niche as it plans to grow to five outlets by 2020. As younger people marry later or not at all, the number of one-person households in the nation of 51 million people will climb to 34.3 percent of the total by 2035 from 25.3 percent in 2012, according to Statistics Korea - and each home needs furniture.

IKEA will offer a new challenge to the country's legion of furniture makers, many of which are small. About 61 percent of a total of 1,247 firms in 2012 employed less than 20 people, private think tank Hana Institute of Finance said.

"I came because it's inexpensive and useful, and I wanted to buy after seeing for myself," said Woo Jin-sook, a 46-year old from Seoul. Woo said she took a day off work to be at the store's opening.

Among the 8,600 items on sale, some were modified for local tastes. The "super-single" bed, brought specifically for Korea, offers sleepers up to 40 centimeters more snooze width than a standard single bed.

Alongside its Swedish meatballs, the store's restaurant offers kimchi bibimbap, a rice bowl mixed with the spicy South Korean staple side dish, and Korean barbecue.

"We never planned the biggest store, we just planned a big store, because we believe we need one for a 23-million city (the Seoul metropolitan area)," said Patrick Schuerpf, IKEA Korea's Country Project Manager.