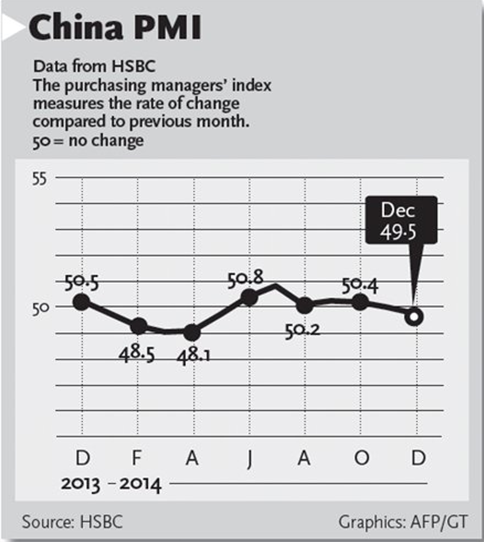 According to a preliminary survey of the country's manufacturing sector by HSBC released on Tuesday, the flash China purchasing managers' index (PMI) reading fell to 49.5 in December from 50.0 last month, after a slump in new orders, which is lower than the market expectation of 49.8.

A PMI reading above 50 signals growth, while a reading below 50 indicates contraction.

The contraction in China's manufacturing sector is largely due to weak domestic demand, and the recent downward trend in international commodity prices which has also dragged the sub-index down, QuHongbin, chief economist at HSBC in Hong Kong, said Tuesday in a statement.

The flash China PMI reading by HSBC is one of the earliest available indicators of the country's December economic operating climate.

"The downbeat PMI reading fits with our view that the benchmark rate cut and apparent loosening of lending controls last month will not be enough to prevent industrial activity from cooling further," Julian Evans-Pritchard, a China economist at Capital Economics, a London-based economic consultancy, said in a research note sent to the Global Times.

China's November official PMI reading for the manufacturing sector - which focuses more on State-owned enterprises than HSBC's SME-focused reading - also dropped to an eight-month low at 50.3, below market estimates.

These economic data, including the PMI reading, signify that the economy will continue to face risks in December, Liu Xuezhi, an analyst with the Bank of Communications, told the Global Times on Tuesday.

The official PMI and other economic data such as fixed-assets investment, a key driving force of China's economic growth, are expected to remain at low levels in the last month of 2014, Liu said.

In the January-November period, China's fixed-asset investment increased by 15.8 percent from the previous year, the lowest level in almost 13 years, data from the National Bureau of Statistics showed Friday.

The weak reading came after a key annual economic meeting ended on Thursday, where China's leadership called on the country to adapt to a "new normal," wherein the economy would grow at a slower pace.

China's economy is expected to expand at 7.0-7.2 percent in 2015, down from this year's 7.5 growth target, Liu said. But in this "new normal," the economy will be focused more on quality and sustainable growth, Liu added.

One bright spot in the latest economic data was a rebound in China's foreign direct investment (FDI).

FDI flowing into China rose 22.2 percent in November over the previous year, hitting a 16-month high, ShenDanyang, spokesman for the Ministry of Commerce, told a press conference in Beijing Tuesday.

The reading followed a 1.3 percent rise in October and 1.9 percent increase in September, official data showed.

Several large investments spurred FDI growth in November, with China's attraction of overseas investment shifting from the manufacturing to the services industry, He Weiwen, co-director of the China-US-EU Study Center under the China Association of International Trade, told the Global Times on Tuesday.

In the January-November period, inbound FDI in the service sector increased 7.9 percent to $58.55 billion, accounting for 55.1 percent of the total volume, according to data issued by the Ministry of Commerce.

Investments coming from South Korea saw fast growth with 22.9 percent in the first 11 months. By contrast, investment from the US and the EU dropped by 22.2 percent and 9.8 percent respectively in the same period, the data showed.

But this does not mean that China's investment environment has deteriorated for US and EU firms, ShenDanyang told the Global Times on Tuesday.