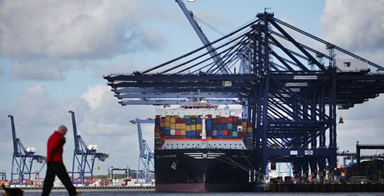 The difference between the amount the UK imports and exports narrowed to a seven-month low in October, official data shows.

The Office for National Statistics (ONS) said the UK's trade deficit in goods and services stood at £2bn in October, compared with £2.8bn in September.

The narrowing of the gap was driven mainly by a drop in oil imports.

A rise in exports, helped by sales of silver to India, also had an impact.

The goods trade deficit for October also shrank to £9.6bn from £10.5bn, again marking its lowest level for seven months, but still higher than the £9.5bn expected by economists polled by Reuters.

The UK's goods trade deficit with countries in the 28-nation European Union narrowed, helped by the small increase in exports, and bucking fears that the eurozone's weak growth could hurt demand.

Despite the narrower gulf, the lack of a significant improvement in the volume of exports, has raised concerns about the strength of the UK's economic recovery.

The UK's economy expanded by 0.7% in the third quarter of this year, although its trade performance weighed on activity.

The ONS said trade would represent less of a drag in the final reading of economic growth because of revisions to data from previous months, but said it had not yet calculated what the difference would be.

"This would be a significant boost to the chances that growth will hold up well in the fourth quarter and come in close to the third quarter outturn of 0.7% quarter-on-quarter," he added.