Pantone reveals 2015 Color of the Year 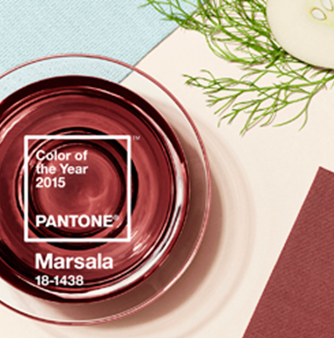 The color institute describes the hue as “a naturally robust and earthy wine red” that makes for an “elegant, grounded statement color when used on its own or as a strong accent to many other colors.”

Pantone calls Marsala “a unifying element for interior spaces” that translates well to accent pieces, accessories, paint, upholstery, rugs and kitchen and dining room décor. According to a press release, “The hue will be especially prominent in striping and floral patterns found in printed placemats, dinnerware, bedding and throws.”

Oriental Weavers, which has an exclusive product development relationship with Pantone, has already designed Marsala area rugs that will make their debut at the Atlanta International Area Rug Market and the Las Vegas Market in January.

"Much like the fortified wine that gives Marsala its name, this tasteful hue embodies the satisfying richness of a fulfilling meal, while its grounding red-brown roots emanate a sophisticated, natural earthiness. This hearty, yet stylish tone is universally appealing and translates easily to fashion, beauty, industrial design, home furnishings and interiors."

In selecting the Color of the Year, Pantone explores influences in the entertainment industry and films that are in production, the world of art, popular travel destinations and other socio-economic conditions. Influences may also stem from technology, availability of new textures and effects that impact color, and even upcoming sports events.