So Your Style Is: Early American

In November 1620, a group of Europeans docked near the tip of Cape Cod and staggered onto the soil of North America. Historians say they called themselves Separatists, as they had removed themselves from the Church of England, but today we know them as the Pilgrims. Many of our religious, governmental and social roots were established by these determined and resilient folk — and perhaps our style roots too. 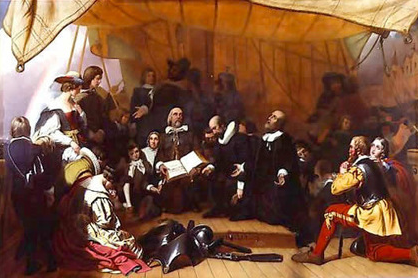 You’ll love it if: Your taste is plain and simple rather than “more is more,” and you appreciate natural colors and materials.

This early painting shows the signing of the Mayflower Compact, a document that outlined the Pilgrims’ self-government. According to an article in the Smithsonian,“We do know that they did not dress in black and white and wear stovepipe hats as the Puritans did. They dressed in earth tones — the green, brown and russet corduroy typical of the English countryside. And, while they were certainly religious, they could also be spiteful, vindictive and petty — as well as honest, upright and courageous, all part of the DNA they would bequeath to their adopted homeland.” The article goes on to point out that the Puritans earned their moniker by insisting that the Church of England purify its religious practices. The Separatists went further by splitting from the church completely. 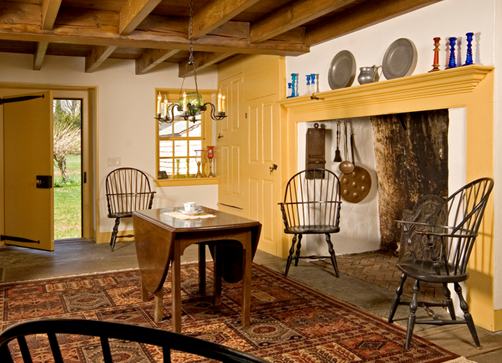 There’s no doubt the Pilgrims had a tough go of it, which is why the style is simple and austere — after all, who had time to decorate when survival depended on maintaining basic shelter and putting food on the table in a strange land? Meals were prepared over an open fire.

According to interviews with Kathleen Wall, a culinary historian at Plimoth Plantation, a living history museum in Plymouth, Massachusetts, that famous meal we now celebrate as Thanksgiving would have included wildfowl (maybe wild turkey), corn, bread, porridge and venison. Spit-roasted bird was a common delicacy.

This fireplace lives in a Pennsylvania farmhouse, restored by Fredendall Building Company. By the Pilgrims’ standards, it would have been unimaginably luxurious. However, they would likely have recognized the cooking implements and tools that hang by the fire. 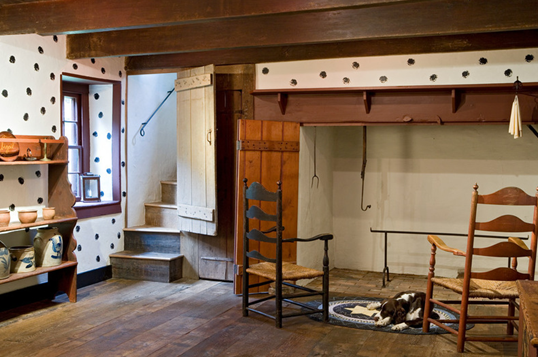 The same could be said for this 18th-century home, restored by Griffiths Construction and Peter Zimmerman Architects. The two-pronged fork, the pot hook and what is probably a type of spit rack would have been our ancestors’ tools of the cooking trade. According to the pros at Griffiths Construction, “Salvaged antique materials, including onsite-gathered building stone, entire floor beam systems, millwork, doors, mantels, glass, flooring, roof tiles and hardware, were painstakingly collected and restored by the client and builder to be incorporated in the project.” 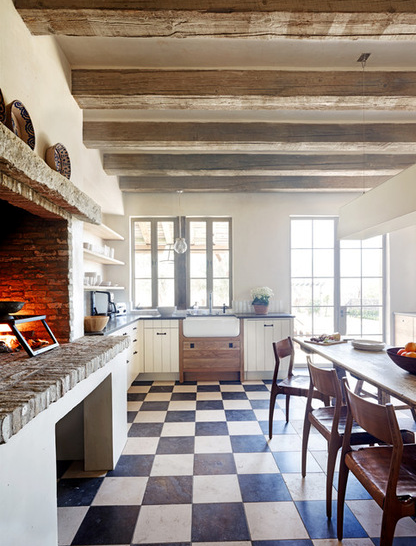 Something different: Do you crave the smoky flavor of a meal cooked over the flames but don’t relish bending low to stir the pot? Check out this counter-height cooking fireplace, designed by Don Ziebell. 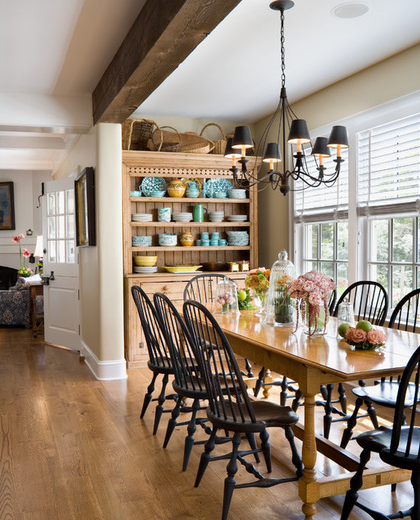 Search online for the phrase “the first Thanksgiving” and you’ll come up with many pictures of food mounded on long, rustic tables. After all, the good harvest and the gathering of friends would necessitate such.

This project, by Griffiths Construction and Archer & Buchanan Architecture, shows how the traditional look of such a table can be incorporated into a new home. This space also contains hallmarks of the look, such as baskets and Windsor chairs — more on those in a moment. The makers write that the “invitation to come sit awhile is irresistible.” 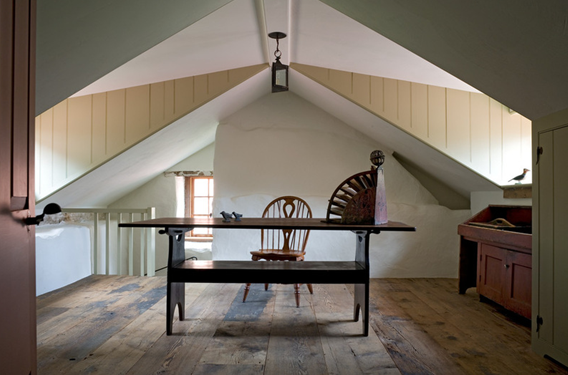 Something different: Who says that a farmhouse table must be used as a table? This table, set in an austere environment that’s somehow both cleanly modern and highly traditional, might warm the cockles of the most rigid Puritan’s heart. 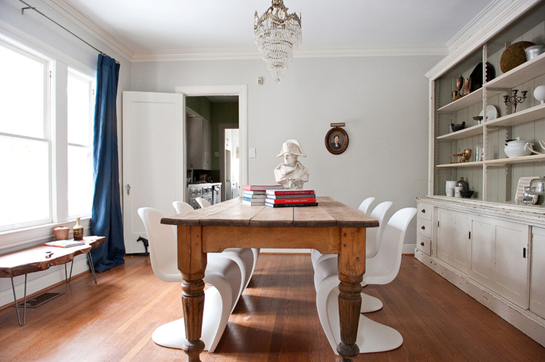 Another modern move is to surround the classic table with blatantly modern chairs for a contemporary look. 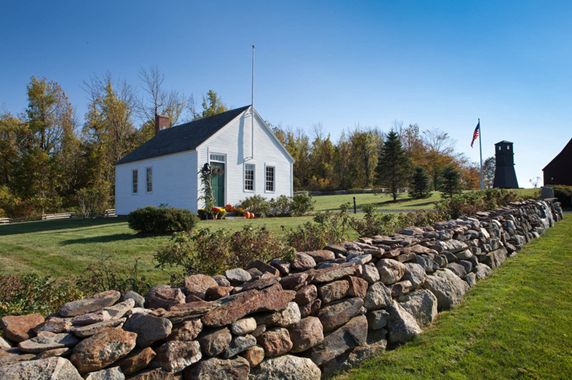 It’s well documented that the Pilgrims used the materials the land provided, including stones. According to the New York Times, there are several New England stone fences dating to the mid-1600s that survive today. 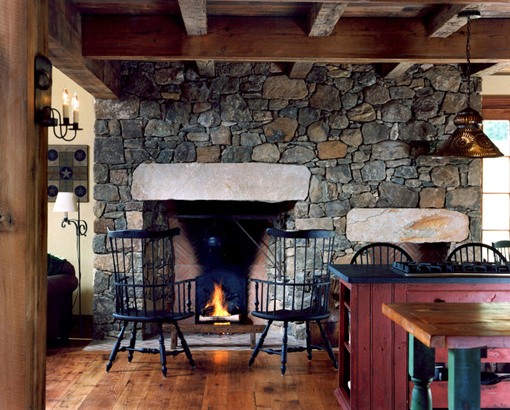 The look was brought inside with stone fireplaces. This project, another by Archer & Buchanan Architecture, shows a fresh take on the age-old look. 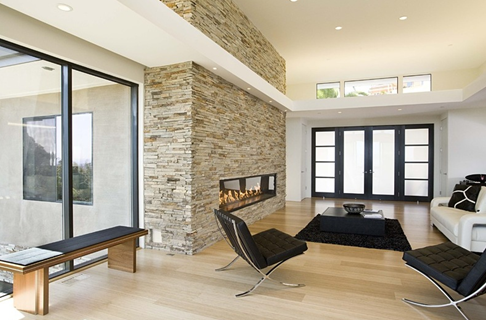 Something different: But that’s not to say that all stacked stone is rustic or looks as if it was pulled fresh from the field. This project, by Mark English Architects, shows the modern side of stacked stone. 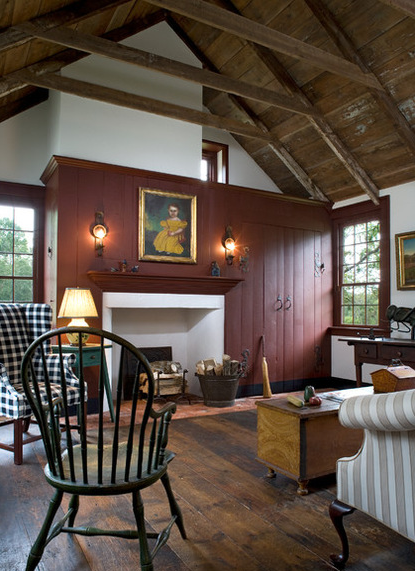 Probably due to the hardship of the Pilgrims’ new lives in America, there isn’t a wealth of Pilgrim portraits. However, Mayflower passengers, such as Edward Winslow, and the children of Pilgrims, such as Elizabeth Paddy Wensley, did have their portraits done. These items would have been vaunted and displayed in a special place. The portrait here hangs in another project by Griffiths Construction and shows how it might have been done. 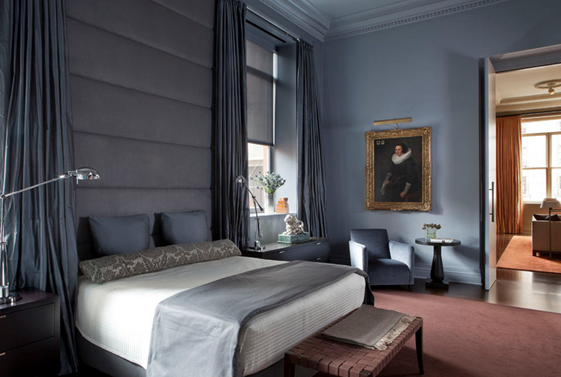 Something different: Ancestral-style portraits take on the look of today when displayed against a modern backdrop. 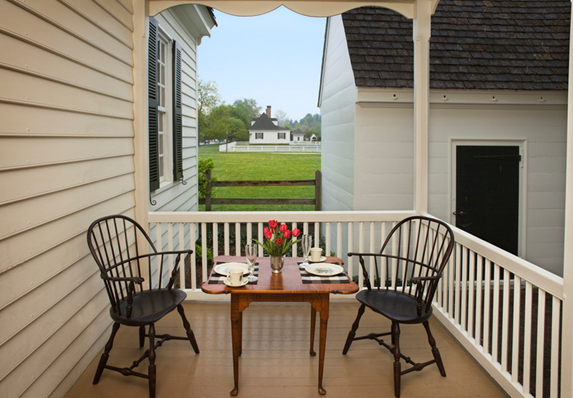 The exact date of the Windsor chair’s creation is lost to time, but it is known that a few decades after the Pilgrims established themselves in what they called the New Country, the look was fashionable. 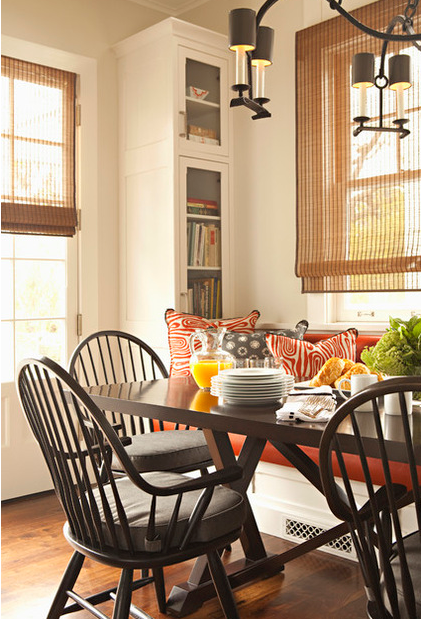 Something different: As an earlier ideabook on Houzz says, Windsor chairs have joined the mod squad, finding a home in today’s interiors. Many versions can be found, including this streamlined version, by DutchCrafters, in an interior by Tim Barber Architecture & Interior Design. 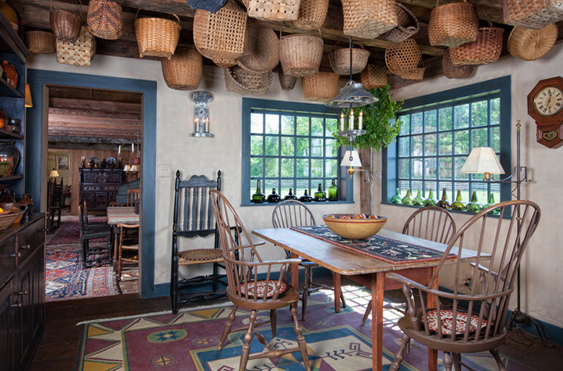 No self-respecting woman in early America would have found herself without a basket. It was perhaps the statement piece of the colony, and used for all kinds of household and village activities. According to the experts at Plimouth Plantation, most of the baskets the Pilgrims had were imported from England, so a collection like this one would have been worth a fortune. 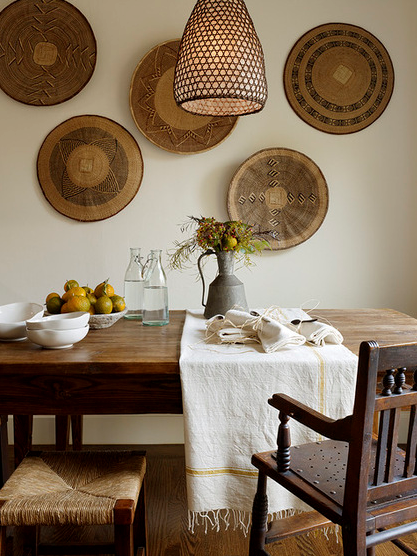 Something different: The baskets hanging on the wall in this project, by Jute Interior Design, were also imported but likely from Africa. The handcrafted designs have a graphic look when used as wall art. 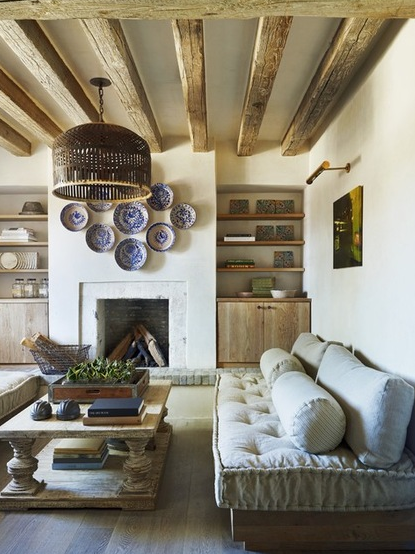 For something really different, try installing a fixture such as the Metal Basket Lamp by Cisco Brothers, seen here in a project by David Michael Miller Associates. 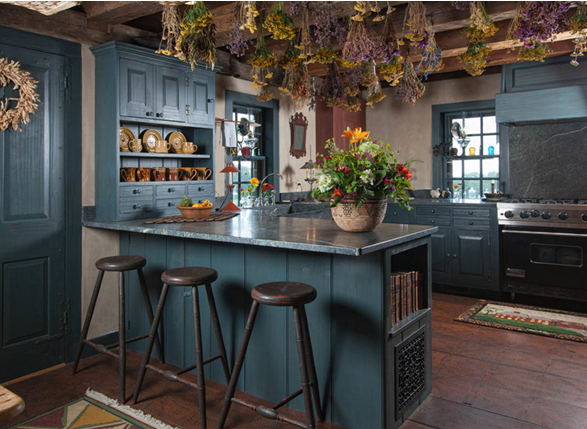 History says that dried herbs and plants had nothing to do with nostalgia; rather they were used as medicines or for cooking. Many Pilgrim kitchens likely had a stock of them. It’s probably safe to assume the dried flowers here are meant for decoration. 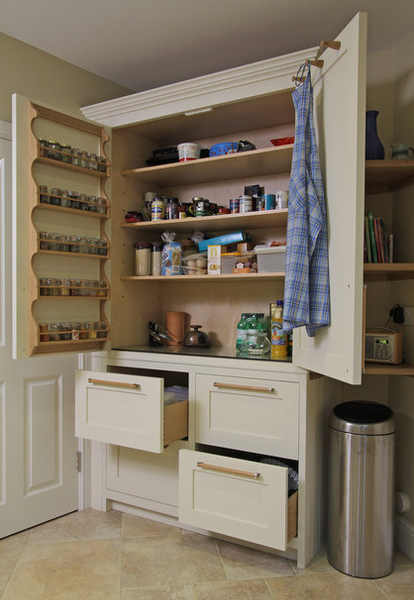 Something different: Anyone who has rummaged in a cabinet for the right dried spice or herb would envy this cabinet display, by Beau-Port Kitchens. The bottles are kept in easy-to-scan racks at eye (or near-eye) level.