Target.com has launched a collection of accent furniture and headboards upholstered in the bold, colorful fabrics of Finnish textile company Vallila Interior. 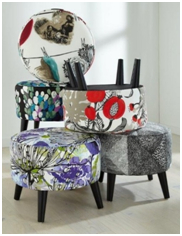 The Target collection, which also includes ottomans, footstools, settees, chairs and storage benches, features eight of Vallila’s Scandinavian prints: Kelohonka (Trees), showcasing the Finnish forest; Hehku (Hearts), the result of a collaboration between Vallila’s in-house designers and a Finnish musician; and Bulevardi (Boulevard), an interpretation of Helsinki’s city centre. Also included in the collection are the floral and graphic designs of Papaija (Papa), Sintra, Lintukoto (Bird House), Anis and Aronia.

The family-owned Finnish textile, rug and wallpaper design company was established in 1935 when it began producing woven silk fabric. In the mid-sixties, Vallila began designing print fabrics. American designer and artist Howard Smith joined the company in the seventies, and it was his design style and use of colors that laid the foundation for the large, bold prints Vallila is known for. 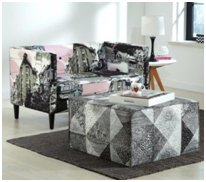 According to a statement from the company, one of Vallila’s guiding principles has always been to make design available to everyone. The company's in-house designers introduce a new textile and rug collection twice a year.