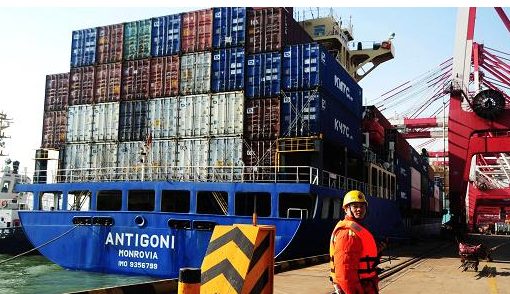 China's exports gained steam in May thanks to firmer global demand, data showed on Sunday, but an unexpected fall in imports signaled weaker domestic demand that could continue to weigh on the world's second-largest economy.

Exports rose 7 percent in May from a year earlier, quickening from April's 0.9 percent rise, while imports fell 1.6 percent, versus a rise of 0.8 percent in April, the General Administration of Customs said.

China's trade surplus widened sharply to $35.9 billion in May from April's $18.5 billion, the customs office said.

"We do not think the May trade data will change the policy stance significantly," Louis Kuijs, an RBS economist in Hong Kong, said in a note.

"While the export data is reasonably positive, the weakness of domestic demand implied by the import data may keep the pressure up for initiatives to support growth," he said.

China's commerce ministry had predicted that the trade picture could brighten in May as base efforts fade and government support measures kick in.

Analysts have attributed the weak trade figures partly to an inflated comparison base with last year due to a rash of fake invoicing of exports to beat currency restrictions.

Authorities have cracked down on such activities since May of last year.

"The data shows that the country's exports growth has returned to a normal level and will continue to improve," customs office spokesman Zheng Yuesheng told state television.

The pick-up in exports follows a batch of factory surveys for May that showed improvement in activity, as the government steps up targeted measures to support growth, including quickening construction of railways and public housing and loosening credit conditions for selected banks.

The government has also unveiled some policy support for the export sector, including giving more tax breaks, credit insurance and currency hedging options to its exporters.

Last month, a senior commerce ministry official suggested China could miss its target for trade growth for a third consecutive year in 2014 as higher labor costs and weaker global demand hurt what had been one of the economy's main engines.

China's combined exports and imports edged up 0.2 percent in the first five months from a year earlier, trailing far behind the annual growth target of 7.5 percent.

Analysts believe that China's property market could put downward pressure on growth even as global demand improves, as evidence mounts of a rapid cooling in what had been one of the few strong spots in the economy.

The government is due to release inflation data on Tuesday, and industrial output, retail sales and fixed-asset investment on Friday. New loan and money supply data will be issued between June 10-15.

A Reuters poll found analysts expect annual economic growth to slow to 7.3 percent in the second quarter from 7.4 percent in the previous quarter, with full-year growth of 7.3 percent in 2014, the weakest in 24 years and below the government target of 7.5 percent.