Walmart's 'Made in USA' push exposes strains of manufacturing rebirth 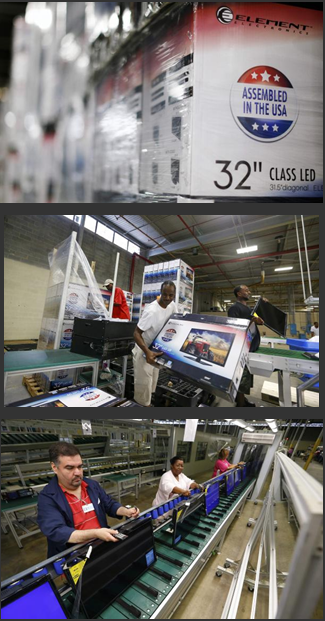 When Walmart pledged last year to buy an extra $250 billion in U.S.-made goods over the next decade, it appeared to be just what was needed to help move America's putative manufacturing renaissance from rhetoric to reality.

But suppliers trying to reshore production as part of the initiative by the world's largest retailer are running into practical problems as they try to restart long-idled corners of U.S. manufacturing.

Companies that make the leap have to grapple with a host of challenges, including a shallow pool of component suppliers, an inexperienced workforce, and other shortcomings that developed during the country's long industrial decline.

"A lot of the tribal knowledge and skill sets are gone because the humans who used to do that work have either retired or died," says H. Kim Kelley, the CEO of Hampton Products International, a privately held maker of locks, lighting and other household hardware. The Foothill Ranch, California-based company began selling products made in Asia to Walmartin the 1990s and is now supplying it with some U.S.-made products.

Trying to rebuild that manufacturing capability, while making products that meet Walmart's standards, can require companies to “start from scratch,” Kelley says.

CindiMarsiglio, the Walmart vice president overseeing the U.S. sourcing push, says the retailer and its existing suppliers have 150 active reshoring projects in various stages of development. For all too many, she says, finding U.S.-made component parts has emerged as a vexing problem.

The issue is so widespread that Walmart is making it the focus of a two-day summit it is hosting in August in Denver. At a similar summit held in Orlando last year, Walmart focused on connecting suppliers with economic development officers from states hoping to lure the new factories.

The retailer says it is especially interested in having factory owners with excess capacity attend the August event - even those that aren't interested in supplying Walmart directly. The hope is that they can become contract manufacturers to Walmart suppliers looking to produce in the United States.

On July 8, it is also inviting hundreds of potential vendors to an "open call" to pitch U.S.-made products to the retailer in Bentonville, Arkansas, where it is based.

Walmart's critics say the company bears some responsibility for the diminished capability of U.S. manufacturers. For years, its relentless insistence that suppliers cut costs prompted companies to shut domestic plants and shift production to low-wage countries.

Now, the retailer is asking companies to come back home - though they need little prompting. The forces pulling production back to the United States are powerful and real and include lower domestic energy prices, increasingly competitive wage rates, the benefits of greater automation, and a renewed appreciation for the value of being able to respond quickly to shifting U.S. customer demands.

Still, starting up a manufacturing operation is a complex undertaking, especially for vendors like Hampton and Redman & Associates, an Arkansas-based toymaker.

Last year, Redman sold 1.1 million battery-powered ride-on toys, such as large toy cars, in the United States - every one of them made in Chinese contract plants. By 2016, the privately held company plans to be producing about 600,000 of those toys each year out of a brand-new company-owned and run plant in the U.S.

Mel Redman, the company's CEO and chairman, says the transition has required the company to reverse engineer everything its Chinese contractors were doing - an exercise that wasn't easy given his executive team's background in retail.

Walmart declines to say how many products it has introduced as a result of the 18-month-old Made in USA initiative. But the company says consumers can now buy everything from U.S.-made flat-screen TVs, light bulbs and towels and curtains in its stores and on its website.

The flat-screen TVs, made in Winnsboro, South Carolina by Element Electronics, may be the campaign’s biggest surprise to date.

Founded in 2007, Element had until this year made all its TVs in Asia - but it was unable to get them on Walmart's shelves because there was nothing that differentiated them from rivals' products, says CEO Mike O'Shaughnessy.

Element built a small test plant in Michigan that began producing flat-screen TVs shortly before Walmart announced the Made in USA push in January 2013. The announcement prompted the company to fast-track its expansion. Today, Element’s 315,000-square-foot plant in South Carolina has six assembly lines making 32- and 40-inch TVs that are now available in all of Walmart's more than 4,000 U.S. stores.

The switch has led to significant savings in ocean freight charges and customs duties on finished goods - though like so many companies involved in the initiative Element has had difficulty finding domestic suppliers. "We import the vast majority of our parts," says O'Shaughnessy. "Longer term, the more success we have procuring our parts domestically, the better off we expect to be."

Although Walmart has given itself 10 years to meet its $250 billion goal, Marsiglio says the retailer hopes to meet the target ahead of schedule. She says the point of the "open call" next month is to simplify a product pitching process that can challenge even long-time suppliers.

But while the door is open, the bar is high and Walmart will require any applicants to open their financial books as part of the screening process.

Given Walmart’s reputation as a tough negotiator with suppliers, the disclosure of sensitive financial information to the retailer requires a leap of faith. But Element's O'Shaughnessy said his company had no misgivings about opening its books. Walmart needs to know it can rely on its vendors, he said.