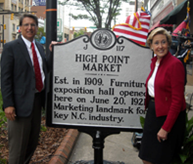 North Carolina Gov. Pat McCrory, left, and Susan Kluttz, secretary of the N.C. Dept. of Cultural Resources, stand beside the N.C. Highway Historical Marker for the High Point Market, which was dedicated on April 28.

Established in 1909, the High Point Market has been an economic driver for North Carolina for more than 100 years.

According to a 2013 study conducted by Duke University, the market generates an annual economic impact of $5.4 billion each year for the state, making home furnishings a key industry for North Carolina with roots that reach back into its past.

That past was recognized on April 28, as Gov. Pat McCrory was among the dignitaries gathered downtown to unveil and dedicate a N.C. Highway Historical Marker immortalizing the High Point Market on the 200 block of South Main Street.

“Mr. Rose, when he built the first building, he was a visionary. I think one of the reasons he built that building here was because the people that were here. They were craftsmen; they were builders; they were artists,” McCrory said.

Doug Bassett, president of Vaughan-Bassett Furniture and chairman of the High Point Market Authority Board, noted that as the economy has rebounded, the market itself has improved to pre-recession figures, which he said bodes well for the industry.

“Governor, the recently completed market saw the second largest number of companies register for a market since the spring of 2007,” Bassett said. “The High Point Market is alive and well and the furniture industry is making a strong comeback.”

“The governor made it clear to me when he appointed me to this job I was to do everything I could to promote the history of this great state, especially to our children,” Kluttz noted. “He also told me he wanted the Department of Cultural Resources to do everything I could to promote economic development and jobs. This marker does both. Today, we recognize the historical significance of the furniture market and celebrate its contributions to North Carolina’s economy in the past, the present and the future.”

Michael Hill, research branch supervisor of the N.C. Office of Archives and History, recognized Alex Stoesen, a retired history teacher at Guilford College, which is located in neighboring Greensboro, N.C., as the individual responsible for nominating the High Point Market.