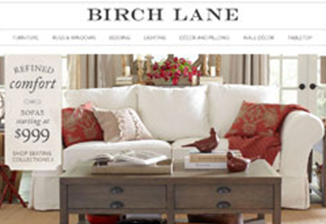 BOSTON — Online home furnishings giant Wayfair launched a fifth brand today and a first-ever print catalog to go along with it.

Birch Lane offers what the e-commerce retailer called a “fresh perspective on traditional furnishings and décor” that consumers can access online or through the catalog, which will be delivered to homes.

The company didn’t disclose suppliers, but said much of the Birch Lane collection has been developed for the new brand, including upholstery, top of bed and drapery. “A significant portion” is exclusive, Wayfair said.

“We are delighted to introduce Birch Lane as the destination where tradition meets inspiration,” Christiane Lemieux, Wayfair’s executive creative director, said in a release. “The furnishings are made to layer with other finds and favorites to create a well-loved and lived-in look. The classic pieces complement almost any décor and stand the test of time.”

Birch Lane, she said, “brings traditional design and great value together in an entirely new way to help people introduce the looks they love into everyday living.”

Items include the rolled-arm Newton sofa for $999 (and non-returnable, according to the website) and the Carlisle sideboard in hardwood solids and cherry veneers for $1,299.

The site launched today with a selection of furniture, lighting, rugs, drapery, top of bed, tabletop and other décor for the bedroom, dining room, living room and home office categories.