Is This The Sears Endgame? 77 More Stores Closing And HQ Being Sold, Insiders Say 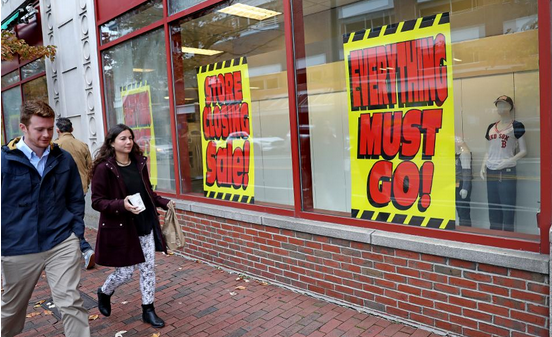 The end is near—or at least it sure looks like it.

Over the past few days have come reports of additional Sears and Kmart store closings and the pending sale of the company’s corporate office complex in suburban Chicago.

None of these reports have been confirmed by the company, but all come from former and current employees who say they have been notified or seen documents substantiating the information.

These new reports follow similar accounts of "massive layoffs" at company headquarters and employees being told their stores were starting their going-out-of-business sales. However, this new information takes the situation to a new depth.

A list of 77 stores that will be closed circulated over the weekend and was obtained from someone believed to be a former employee who said it was understood to involve Kmart branded stores in “the majority.” The list includes ten Pennsylvania stores, seven stores in Michigan and five stores in California, as well as four Puerto Rico locations. Other reports say the count may be as many as 100 stores with some closings starting immediately and running through the end of the year.

The person who supplied the list, who wished to remain anonymous, said a friend who worked at one of the Ohio locations confirmed they were notified of the closing,

All of these closings are believed to be newly announced and not included in any previous counts from the company, Transform, owned and run by former Sears Holding CEO Eddie Lampert, which bought the assets of Sears Holdings earlier this year. Several months ago the company said it was operating around 400 stores, which means the store count after this round could be as low as 300 including both Sears and Kmart locations. That would represent less than a tenth of the store count that existed when Lampert bought Sears and Kmart in the early 2000s.

The situation around the Hoffman Estates, Illinois corporate offices is also unclear. An email from a former employee who is still on severance pay and wished to remain unidentified said, “As far as I can tell, the bottom is truly out. The campus is nearly empty, we have no more business development in the company, so it looks like they’re finally shutting things down. The crew on now is purely skeleton and keep(ing) the lights on.”

This person said the company is in negotiations to sell the complex, which once housed thousands of people and became its corporate headquarters after the company moved out of its iconic Sears Tower offices in downtown Chicago. The buyer, according to this source, is Sterling Bay, a Chicago-based developer that is believed to be looking at the complex as senior center facility. Sears did not respond to an email inquiry for comment and Sterling Bay could not be reached.

There are believed to be new court dates this month regarding the Sears Holding bankruptcy and the sale of its assets to Lampert. At that time, additional details on store closings and other asset sales may be released. Then again, as the complexity of this story reaches unprecedented levels, there may be a whole new scenario by that time.