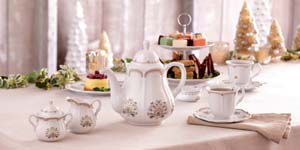 Through its continued partnership with NBCUniversal, Cost Plus World Market has expanded its limited-edition, licensed Downton Abbey collection to include new tabletop items.

The premiere of the sixth and final season of the award-winning British series will air in the United States on Jan. 3, 2016.

The new products include a new sugar bowl and creamer set, tea bag rest, teaspoons, ginger fruitcake, jams and preserves, and paper goods. Developed by the specialty retailer, World Market’s exclusive lines are currently in stores and online at worldmarket.com, and range in price from $3.99 to $29.99.

To celebrate the launch of the new collection, Cost Plus World Market is hosting a Downton Abbey sweepstakes now through Jan. 8 for a chance to win a trip for two to London, with a private chauffeured tour of show filming locations and Highclere Castle, a Downton Abbey script signed by the full cast, and one $1,000 World Market gift card. A first prize of a $500 World Market gift card will also be awarded to three winners. More information is at worldmarketsweepstakes.com.

The retailer is also inviting fans to celebrate the final season of the popular show by holding a virtual “Do the Downton” tea party this Sunday, Dec. 6. Fans can participate by taking a picture of themselves “doing the Downton” or drinking tea with pinky up and posting the picture with the hashtag #DoTheDownton to the retailer’s Facebook, Twitter or Instagram pages for a chance to win prizes, including a $50 World Market gift card.