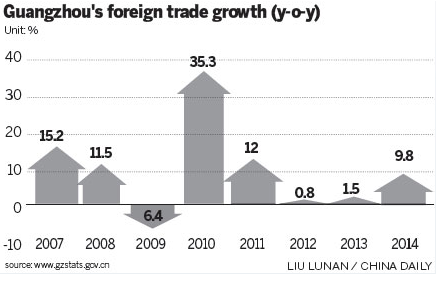 In a government work report for the local people's congress, which opened on Monday, Chen said priority sectors to benefit from new models would include cross-border e-commerce, leasing and duty-free logistics.

"We will also provide one-stop services for international trade by integrating services from customs and inspection and the quarantine authorities for customs declaration, inspection and clearance," said Chen.

The capital of Guangdong province's foreign trade surged 9.8 percent year-on-year to $130.6 billion in 2014, compared to 1.5 percent in 2013 and 0.8 percent in 2012, thanks to an improved trading environment and efforts at building closer links with countries and regions along the ancient Maritime Silk Road, Chen said.

The city's total export value also grew rapidly, by 15.8 percent year-on-year to $72.7 billion in 2014, according to the government work report.

"New business models have been playing a growing role in trade growth, given that the city's traditional trade markets have been experiencing drops in demand," Chen said.

Guangzhou was joined in 2013 by the major Chinese trade cities of Zhengzhou, Shanghai, Chongqing, Hangzhou and Ningbo as pilot cities to introduce cross-border e-commerce services.

After the rebound in its foreign trade, the city has set a 10 percent target for import and export growth for 2015.