Darvin Furniture has begun a $4 million, multi-phase expansion and renovation project it said will enhance its store here for both consumers and employees.

The work is expected to be completed in summer 2016, and when it’s done the building’s footprint will grow to about 212,000 square feet from 177,000 square feet today. Darvin also expects to add about 30 employees, which would push its payroll past 300.

In the first phase, expected to be completed by Dec. 1, the Chicagoland Top 100 company will add 35,000 square feet by adding a second-floor clearance center over what’s now the clearance center on the lower level.

A second phase will include office space expansion and other improvements for employees. In a third phase, the retailer will wrap up the project with a new facade that better shows off the store’s size.

In a release, owners Steve and Marty Darvin said the work is being undertaken to meet growing demand and reflects the stores’ continued sales growth.

“We are very pleased that despite the fact that the furniture industry is still feeling the repercussions of the late-2007 economic turndown, we have been able to consistently run counter to that trend,” said Steve Darvin.

Darvin’s emphasis on providing quality furniture and low prices and exceptional customer service “has allowed us to build an extremely loyal customer base and has attracted multi-generational customers not only from throughout the state of Illinois, but from Indiana, Wisconsin and Ohio,” he added.

The brothers said they couldn’t speculate on the amount of incremental sales following the expansion, but “we know it’s going to add significantly to our volume,” Marty Darvin said.

Darvin is No. 70 on Furniture/Today’s Top 100 with estimated sales last year of $83 million, up 5.1%. In the past year, the retailer has seen new competition in greater Chicago from several Top 100 competitors including Art Van Furniture, The Dump and Sleepy’s.

Some of the changes in store for Darvin aim to reach out to those multi-generational customers Steve Darvinmentioned, especially young consumers. The new clearance center, for instance, will be set up to appeal to the next generation, with a loft-like look, high ceilings with a view from the lower level, and concrete floors.

It will be stocked with bargain-oriented goods, from promotional product to better-end factory closeouts and discontinued items — the kind Darvin regularly secures for its tent and distribution center sales — “all real good values for a consumer we’re really trying to … reach,” Marty Darvin said. The new area also will have a clearance mattress department, area rugs and accessories, added Lori Stengren, vice president of sales, marketing and merchandising for the retailer.

At 35,000 square feet, the space will be more than twice the size of Darvin’s existing clearance center, and while Darvin has not made any firm decisions on sourcing yet, it’s looking to fill it with an expanded assortment from existing suppliers as well as new sources, Steve Darvin said.

The current clearance center will be converted to showroom space for other merchandise, although the retailer is still working on the lineup, which will be developed based on what it finds at upcoming furniture markets, among other things.

The second phase of the expansion will improve space and amenities for Darvin’s employees and includes plans for expanded office space, larger kitchen food prep and eating areas, and a meeting room with projection equipment, screens and sound systems for presentations.

The final phase will give a facelift to the exterior of the store, although the plans have yet to be finalized.

Today, when customers see the store from the road and then come in, they’re amazed by the selection they see because the storefront doesn’t do the store justice, Steve Darvin said.

“The façade right now doesn’t fit the size of the store,” he said, “so we will be doing things with it so the outside represents the inside.”

The work is coinciding with an expansion of La Grange Road in front of the Orland Park, Ill., store to six lanes. The roadwork includes the addition of a traffic light that will feed into Darvin’s parking lot, another plus for the store.

Marty Darvin said the retailer’s, quality, low-price and service attributes were “drilled into my brother Steve and me since the time we were young boys. It has become a way of life to our employees, as well.

“The result is a shopping experience which customers have come to love, a store and company we have all become proud of and continued growth and expansion of our company and with it, the addition of new jobs.” 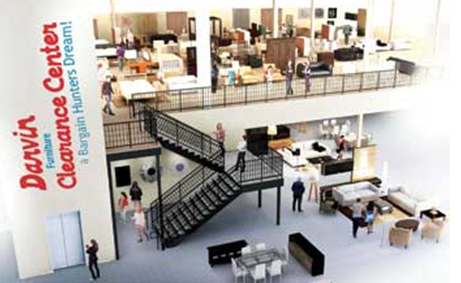