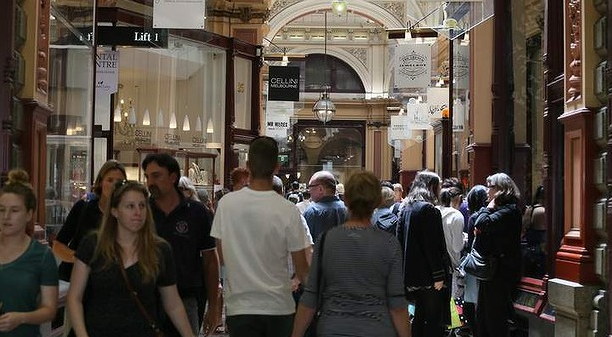 A trickle of profit warnings from retailers this month could be prevented from turning into an avalanche if rising house prices and a delayed lift in interest rates can counter an estimated cut of $10 billion in household expenditure due to belt tightening following the federal budget.

A report on the prospects of the domestic retail sector by Deloitte Access Economics argues that while the budget will clip 1 per cent from consumer spending over the next four years, the cuts to welfare - as well as new taxes and charges flowing from the budget - should not spoil 2014-15 being a strong year for retailers.

Deloitte partner David Rumbens, however, said consumer confidence could be fickle and post-budget readings of shoppers' attitudes showed a slump.

''I think there is a bit of a dichotomy between the actual impact on spending and the immediate impact on confidence or willingness to spend,'' he said. ''No doubt the consumer confidence measures have slumped since the budget, and anecdotes are there might have been poor sales results in May. But I expect over time though, consumer spending will be driven more by underlying actual income growth rather than confidence.''

Since the release of the Abbott government's first budget in May, a string of retailers have shocked investors with earnings downgrades, blaming a pullback in spending around the budget.

In the past fortnight, women's fashion chain Noni B, clothing and apparel manufacturer PacBrands and discount store The Reject Shop have all blamed deteriorating consumer confidence in the wake of the budget for slashing earnings forecasts.

Some analysts believe other discretionary retailers will soon follow, with many eyes on department store Myer as the next likely downgrade victim.

But all is not doom and gloom, according to Deloitte. Despite the budget likely to sink consumer spending by $10 billion by 2017-18, the lost income set aside for discretionary spending is still a modest detraction from retail and other components of consumer spending. Deloitte said: ''Note that the hit to income doesn't come immediately - it is expected to be felt the hardest at the beginning of 2015-16 when GP co-payments and reductions to a range of family benefits commence.''

Low interest rates, and a recovery in both house building and housing prices should also help 2014-15 be an improved year for retailers after a torrid few years of trading.

''The other key caveat to the tough budget message is that the Reserve Bank can essentially offset the impact of the budget on incomes by leaving interest rates lower than they otherwise would have been; that is, by raising rates in 2015 rather than 2014,'' Deloitte said. ''A return to a better rate of jobs growth, combined with current low interest rates, the benefits to Australian business of a lower $A, and the tail-end of a house price surge all suggest 2014-15 may be a pretty good year for retail.''