China's factory sector put in its best performance in four months in May as export orders rebounded although activity remained in contraction territory, a HSBC survey showed on Tuesday.

The final reading of the HSBC/Markit purchasing managers' index (PMI) rose to 49.4 in May from 48.1 in April but was below an initial estimate of 49.7.

The new export orders sub-index rose to a four-year high of 53.2 in May from April's 48.9, but the new orders sub-index barely stopped contracting in a sign that domestic demand remains sluggish even as global demand improves.

"I think it (the rebound in export orders) is encouraging and we need to see more of that," said Louis Kuijs, chief economist for Greater China at RBS.

"Exports are coming along and the news that we get from other Asian countries suggests that the global trade cycle is starting to get better," he added. 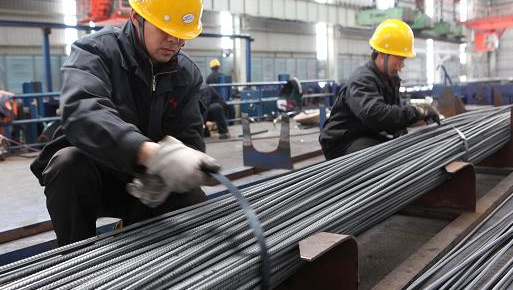 Two employees tie up steel bars at a steel-making plant in Ganyu, China.

On Sunday, China's statistics agency said the official PMI rose to 50.8 in May, its highest level in five months and up from April's 50.4.

The Australian dollar and Australian shares entered negative territory following Tuesday's China data, with the currency around $0.9245, near a three-day low. Australian markets tend to be sensitive to data from the country's biggest trading partner.

Broader Asian equity markets were little changed however, with the Shanghai Composite 0.5 percent higher and the Nikkei index up 0.8 percent at a two-month high.

"The final PMI reading for May confirmed that the economy is stabilizing, but it is too early to say that it has bottomed out, particularly in light of a weaker property sector," said Hongbin Qu, chief economist for China and co-head of Asian economic research at HSBC.

"The lack of a sustainable growth momentum warrants stronger policy support. We expect both monetary and fiscal policy to be loosened gradually over the coming months," he added.

Beijing has stepped in with targeted measures to support economic growth in recent months such as cutting reserve requirement ratios for rural banks and delivering tax cuts for small businesses.