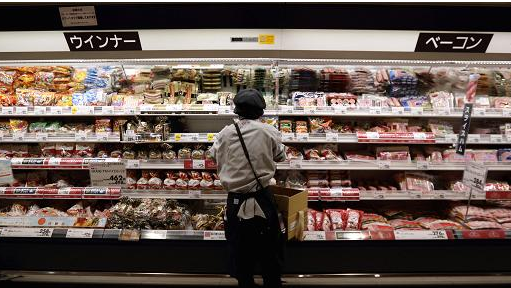 An employee arranges a display of sausages, left, and bacon, right, at an Aeon Co. supermarket in Chiba, Japan.

Japan's retail sales tumbled 4.4 percent on year in April as a rise in the country's consumption tax weighed on spending, data on Thursday showed.

The number compared with analyst expectations in a Reuters poll for a fall of 3.3 percent and marked the fastest annual decline since the March 2011 earthquake and tsunami.

Japan's sales tax was raised to 8 percent from 5 percent at the start of April to help alleviate the country's huge debt burden.

"The worsening retail sales data in April reflect the impact of the VAT hike," analysts at Mizuho Corporate Bank said in a note. "This may reinforce bets for further BoJ [Bank of Japan] easing."

The hike is expected to weigh on economic activity in the second quarter of the year. There has also been some talk about whether the Bank of Japan would ramp up its monetary stimulus in the months ahead to provide extra support for the economy.

Central bank officials have said that any negative impact from the tax increase would be temporary and that the economy can continue to expand.

Indeed, there have been some positive signs this month that suggest the world's third biggest economy will weather the impact of the tax hike.

Corporate Japan lifted orders for machinery by the most ever in March and expect to book more orders this quarter. The economy meanwhile grew at a stronger-than-expected annual pace of 5.9 percent in the first quarter – its fastest pace in almost three years.

Still, the impact of the sales-tax increase on the economy is being watched closely as Prime Minister Shinzo Abe tries to get Japan back on its feet after years of weak growth and deflation.

Also, the last time Tokyo lifted the sales tax in 1997 the economy slipped into a recession not long after and critics of the tax hike have feared the same could happen again.

Economists, however, point out that the 1997 Asian financial crisis also explain Japan's economic woes at that time.

The government is bringing forward public works projects to help buffer the economy, while there is some expectation that wage increases could also support consumer spending in the months ahead.