Ikea plans to install 2,850 solar panels on the roof of its Merriam store that is opening this fall, an array capable of generating enough electricity to power 128 homes. 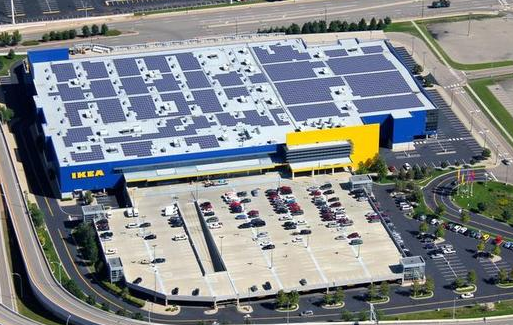 IKEAThe Ikea store in Bloomington, Minn., has solar panels on its roof, just like the Merriam store will have.

The 92,000-square-foot rooftop array was described Wednesday as the largest in Kansas. Installation will begin as soon as the roof of the new store is completed, probably in late June.

Ikea already has installed a geothermal component to its heating and cooling system for the 359,000-square-foot store under construction at Johnson Drive and Interstate 35.

“We are excited about furthering our sustainability commitment with solar panels on the future Merriam store,” Rob Parsons, the new store manager, said in a statement.

“As is the case with geothermal, solar energy will reduce greatly the store’s energy needs and carbon footprint as well as contribute to our vision of creating a better everyday life for many.”

Ikea contracted with SoCore Energy of Chicago to design and install its solar roof, which will begin installation next month. SoCore was described as one of the largest solar developers in the nation.

The retailer has installed solar energy systems at 90 percent of its U.S. locations.

Bragging rights to the largest solar panel setup in the Sunflower State belong to the western Kansas town of Colby. Midwest Energy is building a 4,000-panel solar array for its members in central and western Kansas that will generate 1 megawatt of power when completed this fall.